The HT-01B Magella Attack was a tank mass produced by the Principality of Zeon.

The Principality of Zeon developed the HT-01B Magella Attack to combat the Earth Federation Type 61 MBT. It was not as effective as the Zeon brass hoped. When the Federation started deploying RGM-79 GM units during the One Year War, the Magella Attack proved to be ineffective when pitted against mobile suits, despite its powerful main cannon being capable of taking out mobile suits with a single shot. 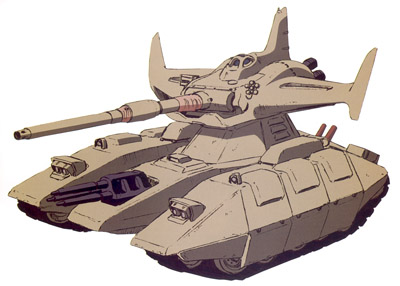 Zeon engineers made use of this fire power advantage by converting Magella Attack main cannons into hand-held weapons for the MS-05B Zaku I and MS-06F Zaku II in place of the standard H&L-SB21K/280 mm Zaku bazooka.

The Magella Eins was an airborne variant produced by Zeon.

The HT-01B Magella Attack was a ground tank produced by the Principality of Zeon. It was designed with a detachable top. This top was mounted with the tank’s main cannon and had limited flight capability. Due to its limited fuel, the top could only fly for a short period of time, making it more useful as an armed escape pod than a proper aircraft.

The detachable top had the advantage of allowing the pilots escape. However, it sacrificed the firing range of the main cannon compared to a turret used by conventional tanks. The Magellan Attack relied on manoeuvring its base to target its main cannon.

The cockpit provided the crew with a greater field of view compared to conventional tanks. 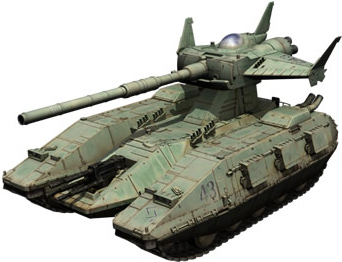 The tank used a cannon as its primary weapon, and relied on a machine gun for close-in anti-aircraft and anti-personnel defence.

The HT-01B Magella Attack had a powerful 150 mmm cannon mounted on its top. The cannon was fixed to the hull and relied on the manoeuvring of the tank’s base for targeting. The cannon was capable of taking out a mobile suit with a single shot. It breach lunar titanium alloy armour with a direct hit.

A three-barrel 35 mmm machine gun was mounted on the base of the tank, facing the front. This was used against enemy aircraft and personnel for close-range defence. However, the machine gun was ineffective against the armour of mobile suits.