A Baoa Qu was a space fortress built by the Principality of Zeon at Lagrangian Point L2. It was the largest and most powerful asteroid base ever built in the Universal Century. After the One Year War, the Republic of Zeon handed the A Baoa Qu to the Earth Federation and the latter renamed it the Gate of Zedan.

The Principality of Zeon built A Baoa Qu by joining two asteroids to form an umbrella-shaped structure that was 13.5 kilometres tall and 9 kilometres in diameter. Zeon mined the asteroids for resources to produce mobile weapons and space vessels. A Baoa Qu was built at Lagrangian Point L2 in an orbit opposite the Zeon homeland Side 3 to provide rear defense. It was the headquarters of the Zeon Armed Forces. 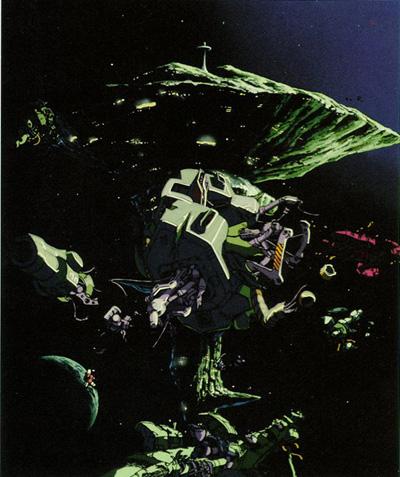 A Baoa Qu was the last line of defense for the Principality of Zeon. It served as the headquarters of the Zeon Armed Force led by Gihren Zabi. During the One Year War it was the site of the epic Battle of A Baoa Qu that saw the Zeon forces making a resilient last stand against the Earth Federation assault.

The Federation attempted to deploy beam-dispersion smoke after using it to great success in the Battle of Solomon. However, Zeon forces were able to stop them from doing so, preventing the Federation from gaining an edge in the battle.

As the Federation forces started to penetrate A Baoa Qu’s defense lines, the Zeon Mobile Assault Force led by Kycilia Zabi arrived to provide reinforcements. The battle hung on a delicate balance. Kycilia executed her brother Gihren for plotting to kill their father Degwin Zabi. This led to factions loyal to Gihren to withdraw from the battle, including the Delaz Fleet. The loss of combat forces swung the battle in favour of the Federation.

Amuro Ray and Char Aznable engaged in close combat in the space fortress piloting the RX-78-2 Gundam and MSN-02 Zeong respectively. Fierce fighting spread onto the surface of the space fortress as Federation’s assault ship White Base was forced to crash land on A Baoa Qu.

Kycilia noticed the unusually heavy losses suffered by her forces and discovered that Zeon had been deploying pilot cadets as they did not have enough fully trained pilots. She knew that the battle was lost and ordered for her ship to be readied for departure, while the remaining Zeon forces would surrender once her escort group had left. However, her orders were never issued as the command centre had been captured by Federation forces by then. Char took advantage of the situation and killed Kycilia.

The remaining Zeon forces retreated from the battlefield. Federation forces overran and captured A Baoa Qu. Zeon signed the Treaty of Granada to officially surrender, bringing the war to and end. The Principality of Zeon was dissolved and the citizens of Side 3 formed their own government, establishing the Republic of Zeon.

During the Gryps Conflict, Axis Zeon allied itself with Titans against the AEUG. However, Axis Zeon leader Haman Karn was actually trying to weaken the Federation to re-establish Zeon dominance in the Earth Sphere. At a crucial moment in the conflict, Axis Zeon betrayed the Titans by switching sides to ally with the AEUG.

Axis Zeon and the AEUG launched a joint attack on the TItans. Zeon rammed its mobile base Axis into the Gate of Zedan at where the two asteroids were joined to form the space fortress. The impact split the Gate of Zedan, crippling the fortress and causing massive casualties to the Titans.

The two asteroids remained abandoned after the war. 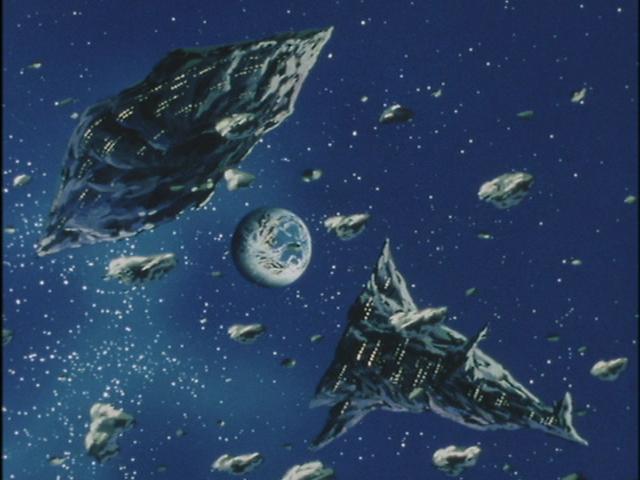 Ruins of the Gate of Zedan