The Samson was a mobile suit transport truck mass produced by the Principality of Zeon.

The Principality of Zeon needed a means to transport mobile suits through civilian areas without alarming the local populace and to hide new mobile suit designs from enemy eyes, hence the Samson trailer was developed. 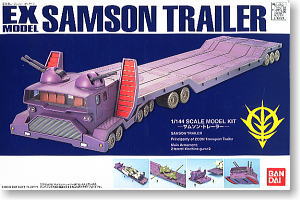 The Samson was designed to carry a standard mobile suit, such as the MS-05B Zaku I and the MS-06F Zaku II, comfortably. Later models might have problems fitting on the truck, depending on how much bigger they were.

The Samson was armed with machine guns for anti-personnel and anti-aircraft defence. When it needed more fire power, it could rely on the mobile suit it carried, although there were situations where the mobile suit being transported was not functional and hence useless.

A twin machine gun turret was mounted on each side of the Samson Top. These were used mainly against enemy personnel and aircraft.