The Luggun was a reconnaissance plane mass produced by the Principality of Zeon.

To prepare for the invasion of Earth, the Principality of Zeon developed the Luggun for reconnaissance purposes within the atmosphere. 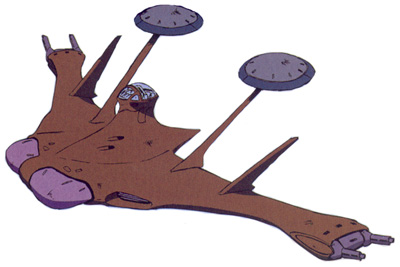 Luggun from the 08th MS Team

The aircraft was deployed during the One Year War. It was eventually replaced by newer designs that were better suited for atmospheric flight.

The Luggun was designed for reconnaissance missions. It had two long antennas, each topped with a radome.

The antennas could switch between being above or below the body of the aircraft to allow maximum detection range. This was usually dependent on the altitude the plane was flying at and the intended scope to be covered by the Luggun.

Despite being a reconnaissance plane, the Luggun was armed with machine guns and missile launchers to provide some defence against enemy attacks.

The Luggun had twin 20 mm machine gun turrets mounted on the tip of each wing. These guns had limited angle of fire, being able to only rotate 45 degrees upwards and downwards.

Two missile launchers were built into each sides of the cockpit tower. These were used to take out enemy surface targets or smaller vehicles with lighter armour.