The Big Tray-class was a line of land battleship produced by the Earth Federation. Notable ships of the line were the Bhatan and the Marketia.

The hoverjets gave the battleships excellent mobility on land and water. However, their movement become hampered over uneven terrain. 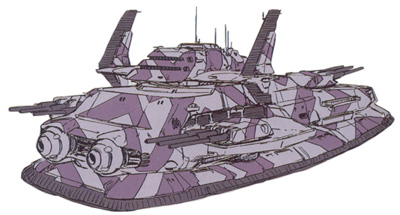 The battleships had two main cannons and three turrets with secondary cannons.

The battleships had two main cannons mounted on their front. The cannons for older models fired projectiles while newer units were armed with mega particle cannons.

Big Tray-class ships had three turrets that had three cannons each. Two turrets were mounted on either side of the ship while the third was mounted on the rear. These turrets had rotating angles of 180 degrees.