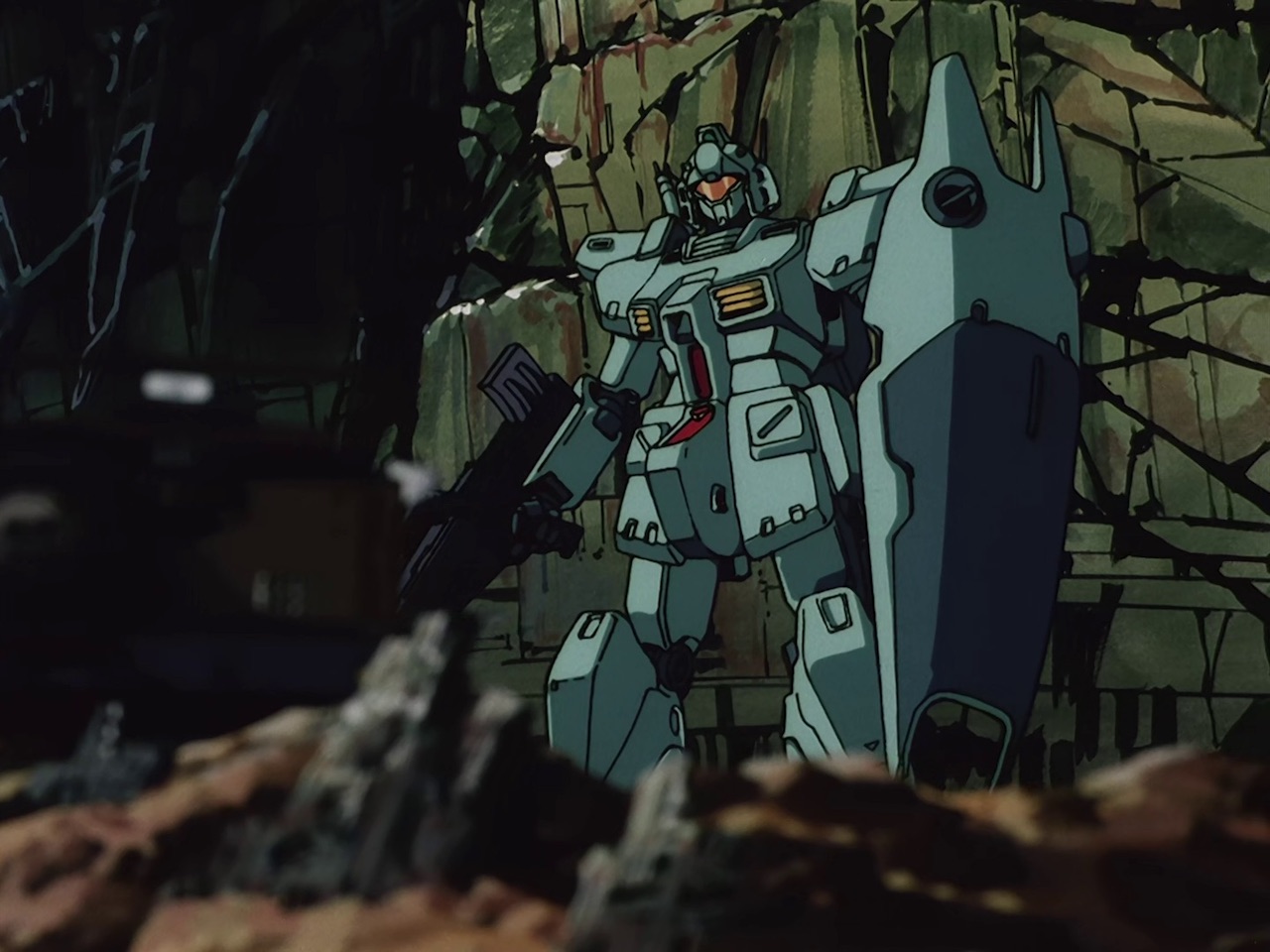 After the One Year War, the Earth Federation begun the reconstruction process of its decimated military. The Federation’s Augusta Base development team built a high performance upgrade of the RGM-79C GM Type C, the RGM-79N GM Custom. Using the GM Type C that used its highly-skilled pilots as the base, the Federation incorporated data and designs from the RX-78NT-1 Gundam Alex.

The GM Custom was an upgrade over the GM Type C in almost all areas, including its cost. Although the Federation planned to replace its existing mass-production models with the GM Custom , its high costs meant only limited numbers were built. These were reserved for ace pilots and selected teams.

In late UC 0083, three GM Custom units stationed on the Pegasus-class assault carrier Albion during Operation Stardust. These units deployed in the battles against Zeon remnants. The unit piloted by Lieutenant South Burning was destroyed in combat.

After the Dela Conflict, the Federation merged the Augusta Base team with the Federation’s elite unit Titans. Titans later improved the GM Custom designs and developed the mass-production RGM-79Q GM Quel.

During the Gryps Conflict, in UC 0087 the AEUG deployed several GM Custom units against the Titans and Axis Zeon.

There are two known variants of the GM Custom, the RGM-79N GM Custom (Silver Haze) and the RGM-79N-Fb GM Custom High Mobility Type.

The success of the RGM-79C GM Type C convinced the Federation engineers to develop a high performance variant. With the GM Type C as the basis of the GM Custom, the Federation incorporated data, technology, and even spare parts from the RX-78NT-1 Gundam Alex.

The GM Custom used a high output-generator, had improved thrusters for greater propulsion, amplified actuators for faster limb response, and additional verniers for increased manoeuvrability. Considered the most powerful GM-type mobile suit during the Delaz Conflict, the GM Custom had performance that rivalled Gundam-type mobile suits.

Compared to the GM Type C, the GM Custom had a more powerful ultracompact fusion reactor that generated 1,420 kW to provide greater propulsion.

The GM Custom was built with titanium ceramic composite. Its limbs had magnetic coating to increase the joint response speed and reduce friction resistance.

The GM Custom had a standard panoramic cockpit with linear seat in its torso.

It had a set of standard sensors with unrated detection range.

The GM Custom’s standard weapons were a beam sabre for melee combat and an optional handheld rifle for ranged attack. Depending on the mission requirement, the GM Custom could equip a 90 mmGM rifle or a 90 mm bullpup machine gun.

A pair of fire-linked 60 mm gatling vulcan guns were mounted on either sides of the GM Custom’s head.

Each vulcan gun was loaded with 600 rounds of ammunition and fired at a rate of 1,600 rounds per minute. It was used primarily against light-armoured support units. Sustained fire from the guns could damage mobile suits and were often used in close distance combat.

The GM Custom had an XB-G-1019H beam sabre for close combat. It had output rated at 0.38 megawatts.

The HFW-GR·MR82-90 mm GM rifle was the GM Custom’s main handheld weapon. Compared to the HWF GMG·MG79-90 mm machine gun, it had a 15% increase in muzzle velocity due to its extended barrel, thus giving it greater armour piercing ability. It was clip-fed using clips with 30 rounds each. Two spare clips were stored in the shield.

The rifle could attach a beam bayonet or grenade launcher under the barrel. It could also mount a longer barrel, scope and stock.

The HFW-GMG·MG79-90mm bullpup machine gun was the GM Custom’s optional handheld ranged weapon. It was developed for use in both space and ground. Its small size deceives its firepower. It could easily take out mobile suits while maintaining accuracy. The machine gun also had a sensor system with visual and laser sensors to the enhance target acquisition capability of the GM Custom’s targeting system.

The GM Custom could optionally equip an RGM·M-Sh-ABT/S-00057 shield for defence. The shield was an upgraded model of the one used by the RGM-79G GM Command. It was mounted on either forearm.

The shield was able to block most ballistic and explosive projectiles. It was also effective in melee combat.