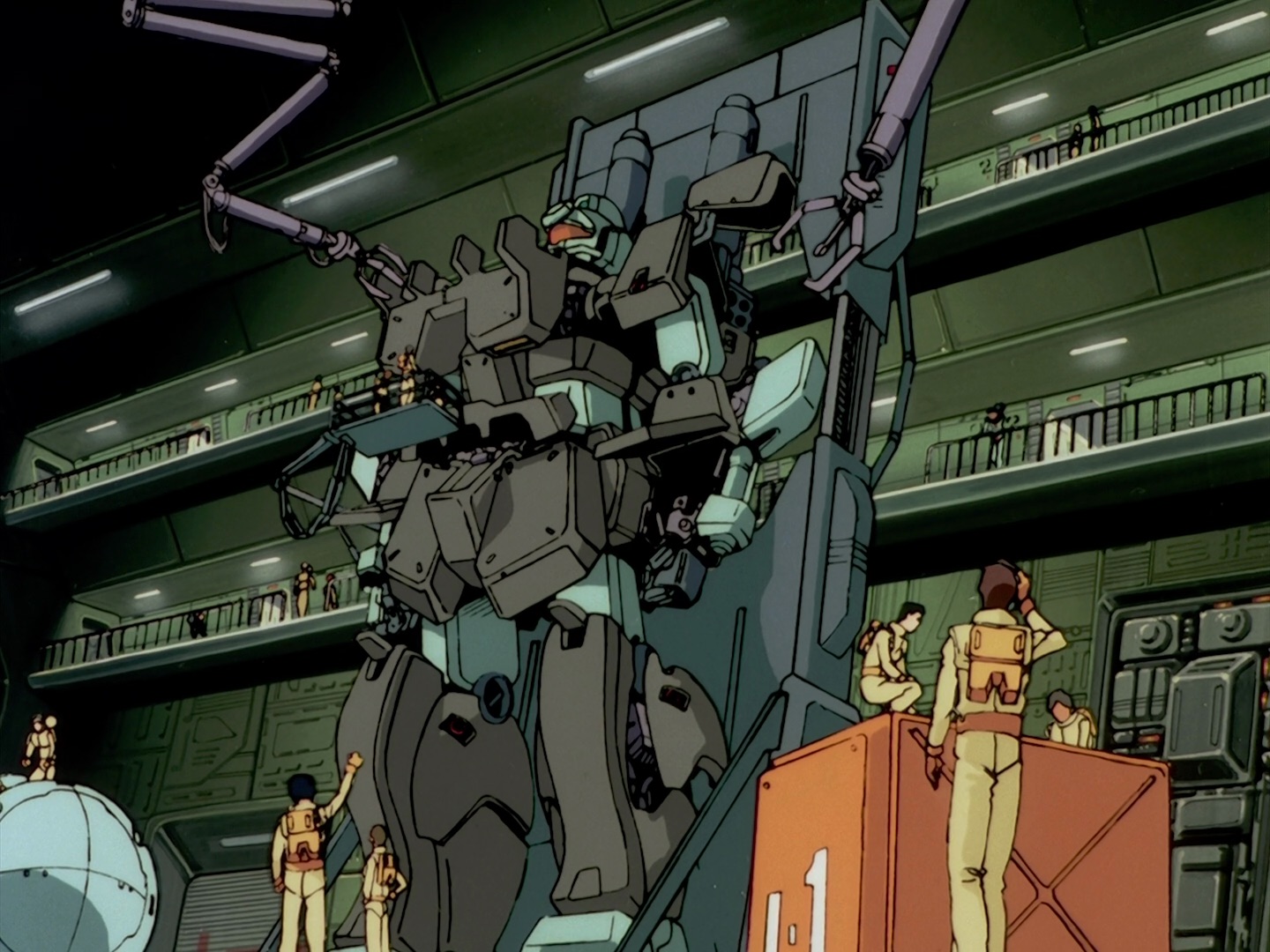 In the final weeks of the One Year War, the Earth Federation rolled out the RGC-80 GM Cannon to provide medium-range fire support for the standard RGM-79 GM. However, the GM Cannon’s late introduction to the War meant it saw a limited production run. After the war ended, the Federation continued working on a new generation of the GM Cannon to complement its new mainstay, the RMS-179 (RGM-79R) GM II. The result was the RGC-83 GM Cannon II.

Like its predecessor, the GM Cannon II saw a limited production run in UC 0083. Notably, two units were stationed on the Pegasus-class assault carrier Albion during Operation Stardust.

Several units were later deployed by the AEUGin UC 0087 during the Gryps Conflict.

The Federation used the RGM-79N GM Custom as the basis for the GM Cannon II so both models shared the same components to reduce production and maintenance costs. It drew inspiration from the RX-77-2 Guncannon and thus looked like the latter with the pair of shoulder-mounted beam cannons. Federation engineers used the data from the RGC-80 GM Cannon and RX-77D Guncannon Mass Production Type to optimise the design of the GM Cannon II.

Compared to the GM Cannon, the GM Cannon II had a more powerful ultracompact fusion reactor that generated 1,420 kW to meet the demands of its mounted beam cannons.

The GM Cannon II was built with titanium ceramic composite. Its thick Chobham armour was first tested on the RX-78NT-1 Gundam Alex near the end of the War. The armour gave it more protection but also caused signification reduction its speed and mobility.

The GM Cannon II had a standard panoramic cockpit with linear seat in its torso.

It had a set of standard sensors that gave it a detection range of up to 6,300 metres.

The GM Cannon II’s standard weapons were mounted beam cannons and an optional handheld 90 mm rifle for ranged attack. It had a beam sabre for melee combat but due to its lack of mobility and speed, it generally avoided close combat. The GM Cannon II could also swap the rifle for a sniper beam rifle for greater range.

A pair of fire-linked MU-86G 60 mm gatling vulcan guns were mounted on either sides of the GM Cannon II’s head.

Each vulcan gun was loaded with 600 rounds of ammunition and fired at a rate of 1,600 rounds per minute. It was used primarily against light-armoured support units. Sustained fire from the guns could damage mobile suits and were often used in close distance combat.

Two beam cannons mounted on the GM Cannon II’s backpack were its primary weapons. The beam cannons drew their rounds from energy capacitors (E-caps), clips of charged Minovsky particles. Minovksy particles broke down matter at a molecular level, allowing the beam cannons bolts to penetrate even the thickest armour. This meant that a single shot could destroy a mobile suit.

The GM Cannon II had a beam sabre for close combat. It had output rated at 0.38 megawatts each.

The HFW-GR·MR82-90 mm GM rifle was the GM Cannon II’s main handheld weapon. Compared to the HWF GMG·MG79-90 mm rifle, it had a 15% increase in muzzle velocity due to its extended barrel, thus giving it greater armour piercing ability. It was clip-fed using clips with 30 rounds each. Two spare clips were stored in the shield.

The BOWA BR-S-85-L3 sniper beam rifle was a long range weapon that increased the firing range of the GM Cannon II. Original designed for the RGM-79SC GM Sniper Custom, it was designed along with the BOWA·BR-S-85-C2 beam rifle used by the RMS-179 (RGM-79R) GM II.

The sniper rifle drew its rounds from energy capacitors (E-caps), clips of charged Minovsky particles. Minovksy particles broke down matter at a molecular level, allowing the beam rifle bolts to penetrate even the thickest armour. This meant that a single shot could destroy a mobile suit.

The GM Cannon II could equip the AE/ZIM.C-BAZ-531 300 mm clay bazooka that the RMS-099 (MSA-099) Rick Dias used. Designed to fire adhesive rounds to immobilise enemies, the bazooka could also load other types of ammunitions such as explosive rounds or pellet shot rounds.

It chamber loaded one round while its magazine carried seven rounds.

The GM Cannon II could optionally equip an RGM·M-Sh-ABT/S-00057 shield for defence. The shield was an upgraded model of the one used by the RGM-79G GM Command. It was mounted on either forearm.

The shield was able to block most ballistic and explosive projectiles. It was also effective in melee combat.