The Dolos-class was a line of heavy carrier ships produced by the Principality of Zeon.

Under the leadership of Supreme Commander Gihren Zabi, the Principality of Zeon embarked on a quest for the ultimate super weapon to end the One Year War. The Dolos-class heavy carrier ship was one of the products of the research program. It was the largest dedicated mobile suit carrier ever built.

The Dolos-class heavy carrier ship was the largest mobile suit carrier ever built. It had the capacity to transport 182 mobile suits within its hull. However, the carrier had inadequate launching facilities. Its seven launch catapults were unable to deploy its mobile suit complement fast enough. The launch of all 182 mobile suits would take more than 20 minutes.

The sheer size of the carrier meant that it was hard to manoeuvre. The ponderous Dolos-class had to depend heavily on its gun turrets and mobile suit squadrons to provide defence against the enemies. 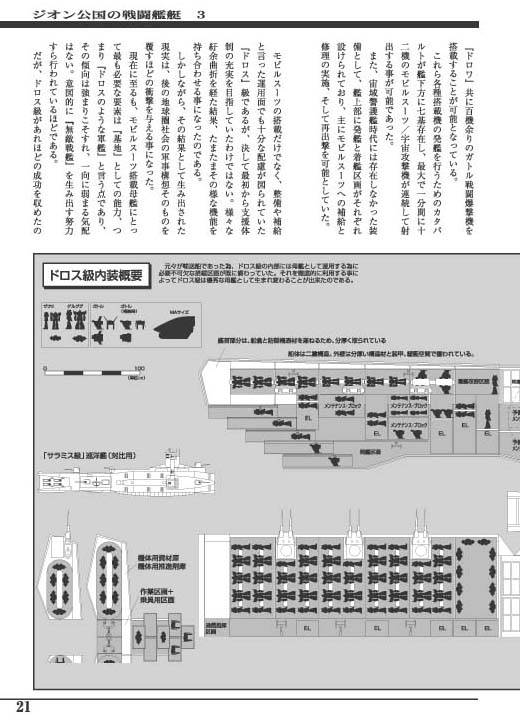 The Dolos-class heavy carrier ship was armed with main guns for combat and machine guns for anti-aircraft defence.

The carrier had eight twin main gun turrets. Three were mounted on each flank and two at the rear. These provided the ship with massive fire power to provide cover for its mobile suits while they launched.

The Dolos-class carriers were mounted with two twin machine gun turrets that were mainly used for anti-aircraft fire against mobile suits and space fighters.

Yoshiyuki Tomino was the principal mechanical designer and Kunio Okawara assisted with the cleaning up of the design.