Axis was an asteroid base in the Asteroid Belt built by the Principality of Zeon. It was later used by Axis Zeon and Neo Zeon.

Axis was an asteroid base constructed by the Principality of Zeon in the Asteroid Belt between Mars and Jupiter.

The base was built for resource mining. When it was in the Asteroid Belt, Axis was a vital resupply point for the Jupiter Energy Fleet during its trips between Earth and Jupiter.

Zeon then developed it into a military base. After the One Year War, the development of mobile weapons and space vessels was moved to Axis. The end of the war saw an influx of refugees. A smaller asteroid Moussa was moved to Axis and attached close to its surface to provide extra living space.

When Axis Zeon was ready to return to the Earth Sphere fitted large thermonuclear pulse thrusters to turn it into a mobile base. 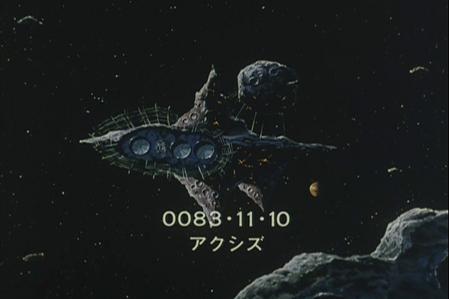 The Principality of Zeon established a mining base on Axis in UC 0072. It was later developed into a military base. Its remote location meant that it was not involved in combat during the One Year War.

Axis was an important refuge for fleeing Zeon forces during the war. When the Principality surrendered to the Earth Federation after the Battle of A Baoa Qu, many of the surviving Zeon forces refused to accept the outcome. Some of the Zeon remnants chose to hide in the Earth Sphere, but most fled to Axis.

The influx of Zeon soldiers and civilians fleeing the Earth Sphere saw the population of Axis growing past 30,000. Living conditions were poor due to overcrowding. The inhabitants faced food and supply shortages, and outbreak of diseases. To alleviate the dire conditions, Axis Zeon moved a smaller asteroid Moussa to Axis and attached it to the surface of the larger asteroid. The sattelite asteroid provided additional space that was used for living quraters, manufacturing facilities, and even gravity block that was one-kilometre by diameter. The gravity block played an important role in producing food for the base. 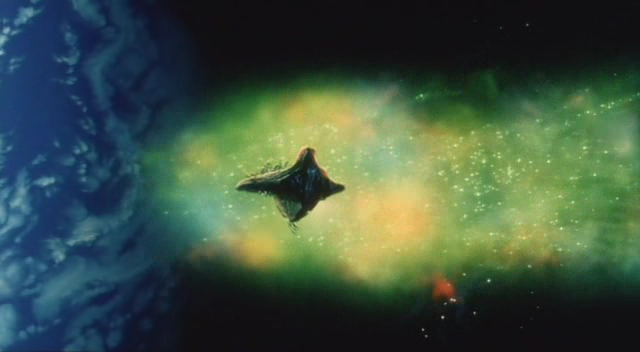 The Earth Sphere was gripped by the Gryps Conflict. The Earth Federation civil war was in a stalemate and both the AEUG and the Titans sought to ally themselves with Axis Zeon to swing the war in their favour.

Zeon leader Haman Karn played both sides to weaken the Federation to make the post war situation favourable for Zeon. During the war, Axis rammed and destroyed the Titans space fortress Gate of Zedan while suffering only minor damage.

After the Gryps Conflict, Haman Karn declared herself the leader of First Neo Zeon movement in UC 0088. Axis functioned as the mobile headquarters for Neo Zeon during the First Neo Zeon War. Near the end of the war, internal strife struck Neo Zeon when a rebel faction led by Glemy Toto turned against Haman.

Glemy seized Axis and crashed it into Haman’s colony Core 3. The remaining Neo Zeon forces were defeated and Axis was abandoned after the war ended.

Char Aznable led the Second Neo Zeon movement in UC 0093 against the Earth Federation. During the Second Neo Zeon War, the Federation sold Axis to Char as part of a peace offering. However, Char had no intention of using it as a base. He planned to drop the asteroid onto Earth to cause a nuclear winter that would force the inhabitants of Earth to migrate to space.

Federation’s Londo Bell attacked Axis with nuclear weapons in an attempt to stop the drop, but the missiles were intercepted by Neo Zeon forces. Londo Bell then infiltrated Axis with petite mobile suits and placed nuclear explosives inside the asteroid. The subsequent detonation split the asteroid into halves. The force of the explosion pushed one half safely into orbit but the other half was plunged towards the Earth.

The drop was prevented from hitting the Earth by Amuro Ray due to the occurrence of the mysterious Psycho-field phenomenon, Axis Shock.

After the revelations of Laplace’s Box in UC 0096, Earth Federation dispatched a Masterna special forces team to investigated the remains of Axis for the existence of the psycho-frame.