The Gaza-E was initially designated MMT-3, where “MMT” stood refers to it being a mass produce mobile suit that was transformable. It was later redesignated as AMX-007 in line with all mobile suits produced by Axis Zeon. 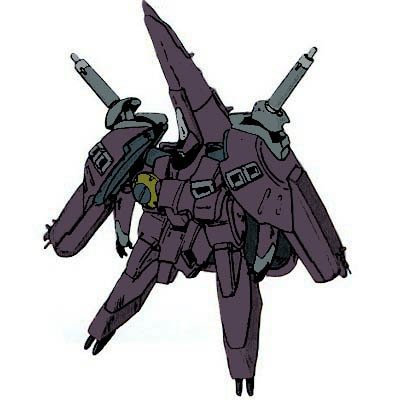 The Zeon engineers developed the AMX-007 Gaza-E and the AMX-008 Ga-Zowmn simultaneously. They were both still transformable mobile weapons, but they were not well-rounded designs like their predecessors.The Gaza-E was specialised for the mobile armour mode, while the Ga-Zowmn excelled in the mobile suit mode.

Due to its high cost of production, which was twice that of the Gaza-C, the Gaza-E only saw a limited production run. Several Gaza-E units were deployed by the spaceship Gwaley to provide cover when the New Desides escaped from Aires on 28 March UC 0088. At least one unit was present onboard the spaceship Gwadan during the final stages of the Gryps Conflict. 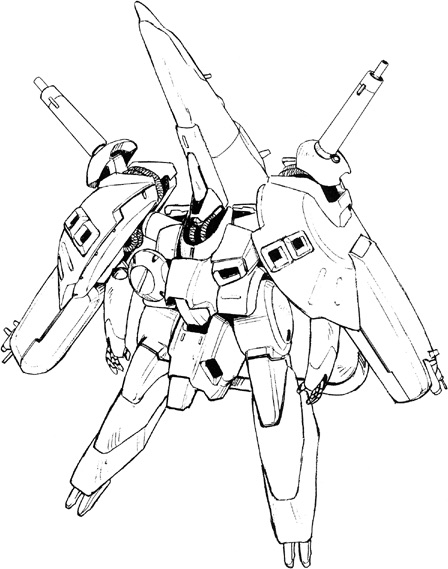 The Gaza-E was built with Gundarium alloy. It was a reproduction of the Luna Titanium alloy used by RX-78-2 Gundam that Zeon developed on Axis by Anaheim Electronics.

Six rocket thrusters with a combined output of 59,300 kg provided main propulsion for Gaza-E. Seven sets of vernier thruster and apogee motors provided fine adjustments. The Gaza-E could fly in atmosphere in mobile armour mode even when it was carrying another mobile suit on its back. This allowed it to function as a sub-flight system akin to the Base Jabber and Dodai Custom.

The Gaza-E was equipped with a standard panoramic cockpit with linear seat. Instead of the cockpit in torso commonly seen in the Universal Century, its cockpit was located in the mobile suit’s head, below the main camera. This was done to simplify the transformation system by removing the need to account for the cockpit in the torso when transforming between the mobile suit and mobile armour modes.

A sensor radome was standard mounted equipment that gave the Gaza-E extended sensor range, making it a useful scout. 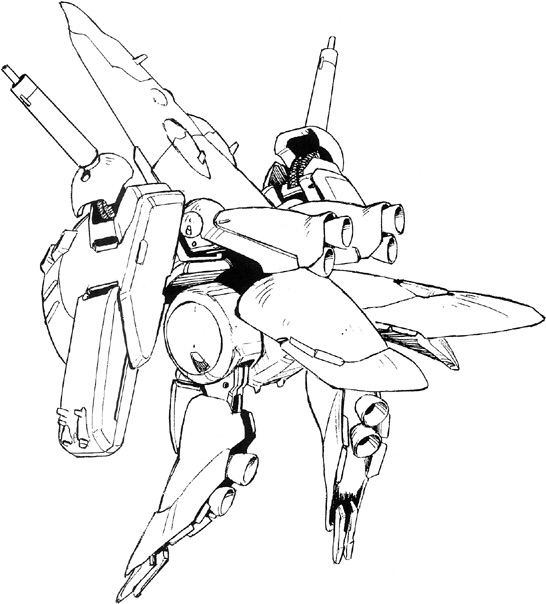 The AMX-007 Gaza-E’s standard weapons were missile pods and beam cannons. It was not armed with melee weapons as it generally performed poorly in mobile suit mode. However, it could equip a bazooka to dish out some handheld ranged attack.

The Gaza-E’s primary weapon was a pair of beam cannons mounted its shoulder binders. These heavy cannons had power output rated at 10 megawatts each. The cannons were mainly used in mobile armour mode as their firing angle was fixed.

The cannons drew their rounds from the Gaza-E’s reactor. Minovsky particles broke down matter at a molecular level, allowing the beam cannon bolts to penetrate even the thickest armour. The high power output meant that a single shot could destroy a mobile suit or damage a space battleship.

The Gaza-E’s two shoulder binders mounted a 24-tube missile pod each. The missile pods could be used in either mobile suit or mobile armour mode. The missiles were effective against armoured enemies, but they were also slow against nimbler targets.

The bazooka was the only handheld armament the Gaza-E could equip. It packed a greater punch than the knuckle buster used by the AMX-003 (MMT-1) Gaza-C and the AMX-006 Gaza-D. However, the bazooka had a slower rate of fire and standard issue included only five rounds.