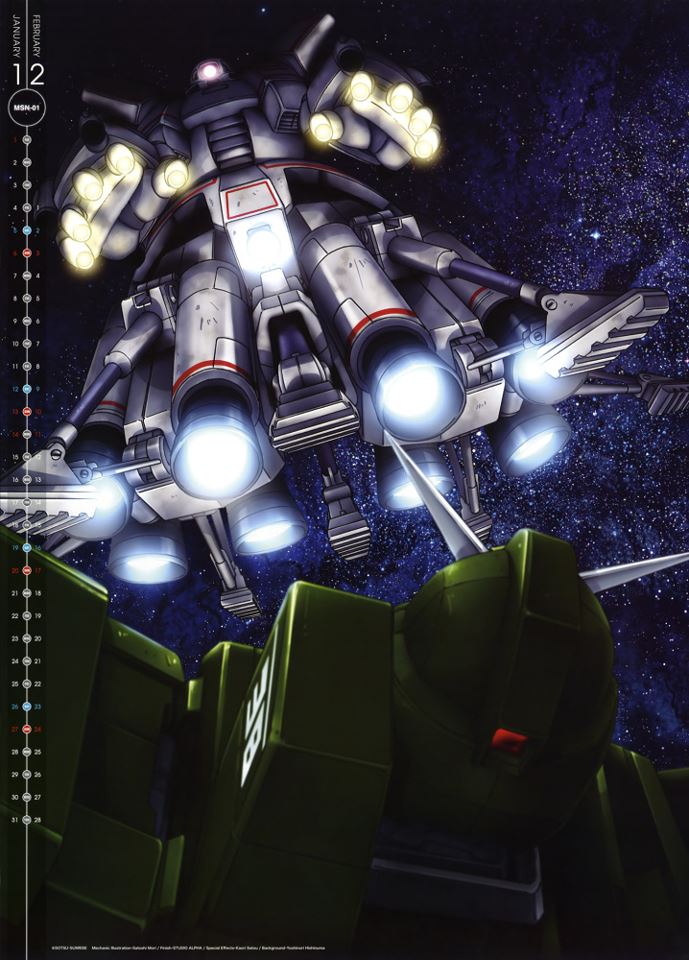 The MSN-01 Psycommu System Zaku was a prototype Newtype-use high mobility mobile suit produced by the Principality of Zeon.

During the One Year War, researches at the Flanagan Institute discovered that Newtypes emitted powerful thought waves. The invention of the psycommu system to tap on these thought waves to control computers unlocked new frontiers in science and technology.

The Principality of Zeon command wanted to implement the technology in mobile suit warfare to give their Newtype pilots the upper hand in the War. The Bishop Plan was a development program with the goal of producing mobile suits equipped with psycommu system. Zeon engineers first tested adding the psycommu system to the MS-06 Zaku II frame to create the YMS-06Z Psycommu Early Test Type Zaku.

Following the success of the unit, they modified three MS-06F Zaku II units into the MS-06Z Bishop for further field tests. However, the addition of the bulky psycommu system led to unsatisfactory test results, especially in terms of mobility and energy consumption. Thus, Zeon developed the the MSN-01 Psycommu System Zaku with high mobility and energy efficiency in mind.

A unit raided Solomon after the Earth Federation captured the base. Another unit piloted by Billy Hickam deployed in the battle of A Baoa Qu the Psycommu System Zaku in the final battle of the One Year War.

The Psycommu System Zaku performed well but high speed mobility results were unsatisfactory. Unable to further reduce the size of the psycommu system, the scientists designed the MSN-02 Zeong from scratch with a larger body frame to accommodate the psycommu system.

The Principality of Zeon developed the MS-06Z Bishop specifically for Newtype -use. However, the psycommu system was too bulky for a Zaku frame and the Bishop had limited mobility and high energy consumption, prompting the scientists to develop the MSN-01 Psycommu System Zaku.

A Minovsky type ultracompact fusion reactor powered the mobile suit. Like the Zeon mobile suits of its time, it had super hard steel alloy armour.

Since it used a Zaku frame, the Psycommu System Zaku had a standard cockpit with linear seat in its torso. It had a set of custom sensors that boosted its detection range through they psycommu system.

The Psycommu System Zaku was equipped with fixed ranged weapons and used its hands for melee combat.

Each of the Psycommu System Zaku’s ten fingers had a mega particle gun built into them. This made each forearm a five-barrel mega particle gun that could be detached from the body and operate remotely. The forearms had thick wires to control them while they were separated from the mobile suit. These had four verniers for positioning.

The five barrels on each hand were fire-linked. The fingers could be manipulated to vary the angle of fire, giving the mobile suit a flexible spread of firing range that made it difficult to dodge the mega particle beams.

Kunio Okawara was the original mechanical designer and the design appeared in Mobile Suit Variations. Hajime Katoki designed the version in Gundam Crisis.