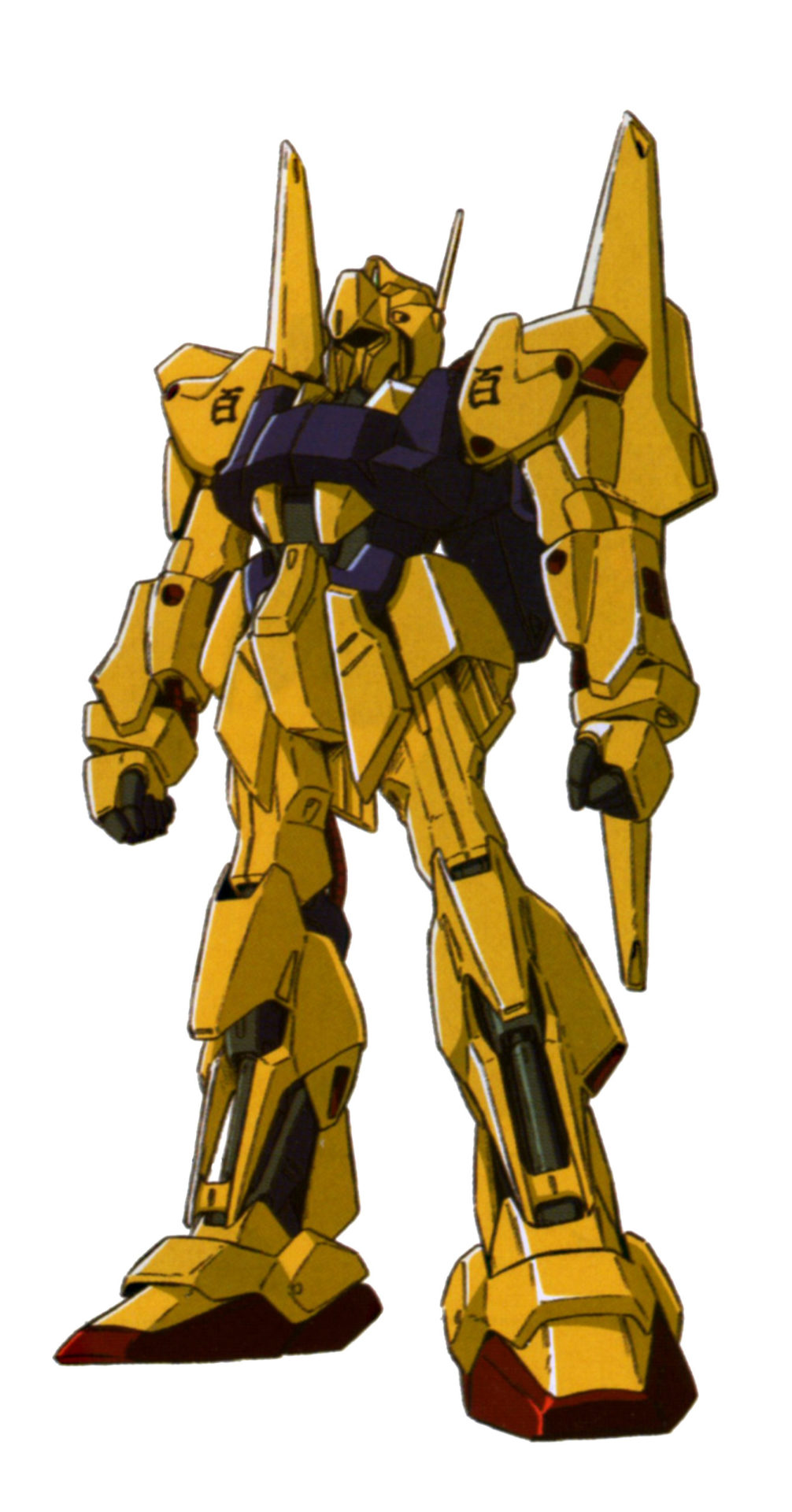 The MSN-00100 Hyaku-Shiki was a prototype assault mobile suit developed by Anaheim Electronics for the AEUG. The “MSN” in the model code indicated it was a mobile suit designed by Doctor Nagano, the lead engineer for the team that designed it. This is unrelated to the MSN series developed by Zeon. The “00100” in the model code was to reflect its name, which meant Hundredth Type. The Hyaku-Shiki was named with hope for the next century of mobile suits.

The Hyaku-Shiki should be named MSA-100 since it came after the RMS-099 (MSA-099) Rick Dias. Supporters for using the MSN code to honour Doctor Nagano argued for MSN-001, although that model number was used by the MSN-001 Delta Gundam. The eventual compromise was to use MSN-00100 to appease both sides. The model code MSN-100 was often used for brevity and convenience.

The AEUG engaged Anaheim Electronics to embark on Project Zeta to develop their next generation mobile suits during the Gryps Conflict. The goal of the project was to produce transformable mobile suit MSZ-006 Zeta Gundam. The MSN-001 Delta Gundam was an early proposal rejected as it could not fit the transformation system. Instead of discarding the good design, Anaheim engineers revised it to create the MSN-00100 Hyaku-Shiki.

The Hyaku-Shiki incorporated data and design features from the RMS-099 (MSA-099) Rick Dias, MSA-003 Nemo, and the RX-178 Gundam Mk-II. AEUG assigned the mobile suit to their ace pilot Quattro Bajeena and deployed it in the Gryps Conflict. The Hyaku-Shiki sustained heavy damage in a battle against the AMX-004 Qubeley piloted by Haman Karn in Feburary UC 0088.

AEUG fielded a second Hyaku-Shiki unit on their assault carrier Argama during the First Neo Zeon War in UC 0088. This unit had several operators among the ship’s young pilots. Among them, Beecha Oleg piloted the Hyaku-Shiki most often.

The suit had experimental wing binders on its backpack for extra thrusters and to increase Active Mass Balance Auto-Control (AMBAC). These binders proved successful and were later implemented in the MSZ-006 Zeta Gundam.

The Hyaku-Shiki was built with Gundarium alloy. It was a reproduction of the Luna Titanium alloy used by RX-78-2 Gundam that Zeon developed on Axis by Anaheim Electronics.

Four rocket thrusters with a combined output of 74,400 kg provided main propulsion for the Hyaku-Shiki. Twelve sets of vernier thruster and apogee motors provided fine adjustments. This made it faster and more manoeuvrable than the Rick Dias. It could mount a ballute system to allow it to survive unassisted atmospheric entry.

The Hyaku-Shiki had a standard panoramic cockpit with linear seat in its torso. It used an Image Directive Encode System that included a visor sensor and dual sensors on the back. The system enhanced its sensor capability without boosting the range.

The MSN-00100 Hyaku-Shiki’s standard weapons were beam sabres for melee combat and beam rifles for ranged attack. It could optionally equip a clay bazooka or a mega bazooka launcher.

A pair of fire-linked 60 mm gatling vulcan guns were mounted on either sides of the Hyaku-Shiki’s head.

The Hyaku-Shiki had a pair of beam sabres for close combat. These had output rated at 0.4 megawatts each.

The BR-M-87 beam rifle was the Hyaku-Shiki’s primary weapon. The beam rifle had a power output rating of 2.8 megawatts.

The beam rifle drew its rounds from energy capacitors (E-caps), clips of charged Minovsky particles. Minovksy particles broke down matter at a molecular level, allowing the beam rifle bolts to penetrate even the thickest armour. This meant that a single shot could destroy a mobile suit.

It had a retractable hook to store it on the Hyaku-Shiki’s backpack when not in use.

The Hyaku-Shiki could optionally equip the AE/ZIM.C-BAZ-531 300 mm clay bazooka that was also used by the RMS-099 (MSA-099) Rick Dias and MSK-008 Dijeh. It carried one round in the chamber and seven rounds per clip.

The clay bazooka was originally designed to fire adhesive rounds to immobilise enemies instead of destroying them. It could also fire conventional explosive rounds or pellet shots.

It had a retractable hook to store it on the Hyaku-Shiki’s backpack when not in use.

The FHA-03M1 mega bazooka launcher was a powerful mega particle cannon with greater firepower that a battleship’s guns. To provide such a large output, the launcher came with its own thermonuclear reactor. Even then, it required a considerable recharge time before each shot. The interval could be shortened by linking several mobile suits to tap on their power plants.

Due to its bulk, the launcher had several sets of verniers to assist in manoeuvring. The mega particle shots could easily breach the hull of battleships, and a well-place should could take out several battleships.

Mamoru Nagano was the original mechanical designer. Kazumi Fujita cleaned up the design.