The Komusai was a shuttle mass produced by the Principality of Zeon.

During the One Year War, the Principality of Zeon needed a means to drop mobile suits from space to Earth. The Komusai was developed to carry up to two mobile suits.

The shuttle was designed to be docked to a Musai-class light cruiser. Each Musai-class cruiser had a Komusai attached to it as a standard protocol. 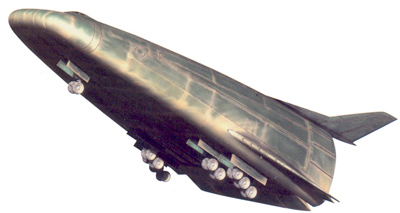 When the Zanzibar-class mobile cruiser was completed, it became the primary way of transporting mobile suits from space to the Earth surface. However, the Komusai continued to be deployed even after the war.

It was seen in service of the Delaz Fleet in UC 0083. The shuttle was eventually phased out in UC 0087.

The Principality of Zeon designed the Komusai along with the Musai-class light cruiser. It was docked with a Musai-class cruiser as a standard.

The cruiser could carry three mobile suits on its own. When the shuttle is docked, it could carry an additional two mobile suits. The mobile suit capacity of the Komusai and the Musai-class vessels referred to early mobile suit designs such as the MS-05B Zaku I and the MS-06F Zaku II. Larger designs that were introduced later could be carried but fewer of them would fit.

The Komusai required a pilot and a co-pilot. It could also carry two other passengers in the bridge.

The shuttle could be docked in the hangar of a Gaw atmospheric attack carrier. It required external propulsion to launch into space.

The shuttle was armed with vulcan guns. Weapons were not useful during atmospheric re-entry.

The Komusai had a pair of vulcan guns built into the sides of its bridge. These were ineffective against mobile suits and provided very minimal fire power.