The Jicco was an assault boat mass produced by the Principality of Zeon.

Before the Principality of Zeon started using mobile suits, it relied on more conventional spacecraft. The Jicco was an assault space boat was smaller and hence more manoeuvrable than capital ships.

The Jicco was an important part of each Zeon fleet, especially before the advent of mobile suit warfare. Armed with just missiles, its sole purpose was to take out enemy space ships. They provided fleet with a means to turn the tide of battle by crippling or destroying larger enemy ships.

The Jicco was an assault boat produced by the Principality of Zeon. The bridge sat above its missile launcher module, linked by an arch to each of its two sets of thrusters. Three fuel storage spheres sat between its the thruster modules. 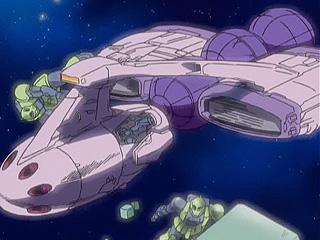 The assault boat had a missile launcher as its sole weapon.

A seven-tube missile launcher was built into the bow of the Jicco. This carried missiles capable of taking out smaller enemy ships and crippling larger ones.