The G-Bull was a Core Block System support tank produced by the Earth Federation.

The G-Parts had an Easy Mode to allow them to operate without the Gundam torso, so they could continue playing a support role to the Gundam during battle. The G-Bull Easy was the standalone version of the G-Bull. 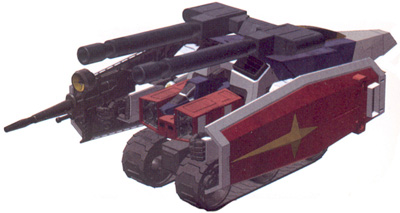 The G-Bull was the combination of the RX-78-2 Gundam with the Core Block System modular units, known as the G-Parts. There were two sets of G-Parts: the A-Parts and the B-Parts. A-Parts consisted of a nose with a canopy cockpit, a set of caterpillar treads, and a pair of beam cannons. The B-Parts was a fuselage with four thrusters.

The Gundam’s torso was connected to the A-Parts at the top to form the G-Bull. The Gundam was able to quickly undock and dock with another module or fight on its own when there was a need for a change in battle tactics.

The G-Bull required two crew, one in the canopy cockpit of the A-parts, and the other in the cockpit in the torso of the Gundam. One of the pilots would act as the tank’s navigator, while the other served as the gunner.

The G-Bull was armed with beam cannons and missile launchers for ranged attacks. These were mounted on the A-Parts modular unit of the support tank. It could equip the optional beam rifle, which was held by the Gundam.

There were a pair of beam cannons mounted on the top of the A-parts modular unit, just behind the canopy cockpit. The cannons could operate longer in the G-Bull configuration compared to the G-Fighter because of the additional generator from the Gundam torso.

The G-Amour had a missile launcher on each side of its nose. The missiles could be used against enemy mobile suits, ships or ground targets.

The G-Bull was mounted with two RX*M-Sh-008/S-01025 (Renpou eXperimental Medium Shield) shields, one on each side. Renpou means Federation in Japanese.

The shield was able to block most ballistic and explosive projectiles. 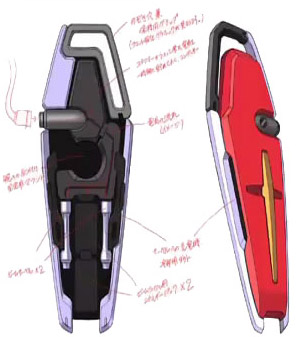 The G-Bull only appeared in the Mobile Suit Gundam anime series. It was removed in the compilation movies, because Yoshiyuki Tomino wanted to make the movies closer to his vision of for the series. So elements that were considered closer to the super robot genre were replaced with real robot elements.

However, Yoshiyuki Tomino felt that the G-Bull was considered closer to the super robot genre, instead of the real robot genre that he envisioned for the series. Thus, the G-Bull was removed in the compilation movies.